For decades, single-molecule measurements have allowed researchers to interrogate the structural heterogeneity and dynamics of biomolecules.  In most solution-phase single-molecule fluorescence studies, biomolecules are either tethered to a surface or physically confined so they can be observed long enough to gather enough data from each probed molecule.  However, these methods have been shown to perturb molecular structure and alter the folding dynamics of intrinsically disordered proteins (IDPs).  To avoid this issue, we employ the use of an anti-Brownian electrokinetic (ABEL) trap which uses electroosmotic flow to cancel the Brownian motion of our fluorescent molecule, allowing for long term observation without immobilization.  We are currently studying tau, an IDP implicated in Alzheimer’s Disease.  Our previous studies on this protein have allowed us to resolve heterogenous populations with distinct rotational parameters, and we are currently investigating the rotational properties of aggregate prone monomers as well as their folding dynamics.  We are also investigating simple peptide and nucleic acid systems to understand the fundamental mechanisms of protein folding. 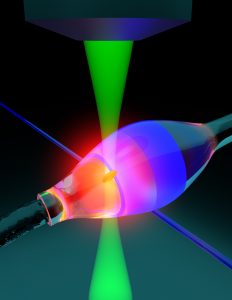 Another frontier of instrument development within our group is adapting our microresonator spectrometers to solution-phase dynamics. One promising platform for such studies is the microbubble resonator, which incorporates a microfluidic inside of the resonator, allowing for easy-exchange of chemical reagents. We have leveraged this technology to study the chemical and rotational dynamics of single gold nanorods (DOI: 10.1021/acsnano.9b04702). In the future, microbubbles and other solution-compatible resonator platforms will be further developed for studying single nanoparticles and molecules undergoing dynamic processes.